One of my discoveries about traveling to the south of France where there really isn’t a big city is that the hotels aren’t all that great. I would categorize them as being similar to a Motel 8. There is no Marriott or Hilton where I was going so I ha to stay in a hotel that was decently close to my work location. The hotel that I stayed in was called the Mona Lisa Royal Hotel. It was a smallish hotel but it boasted breakfast and a pool. I didn’t get to use the pool but I did eat breakfast every day. I would say even a Hampton Inn or a Fairfield Inn are way better than the hotel I stayed in but for Europe I think its about what you should expect in terms of accommodations so far from a big city. 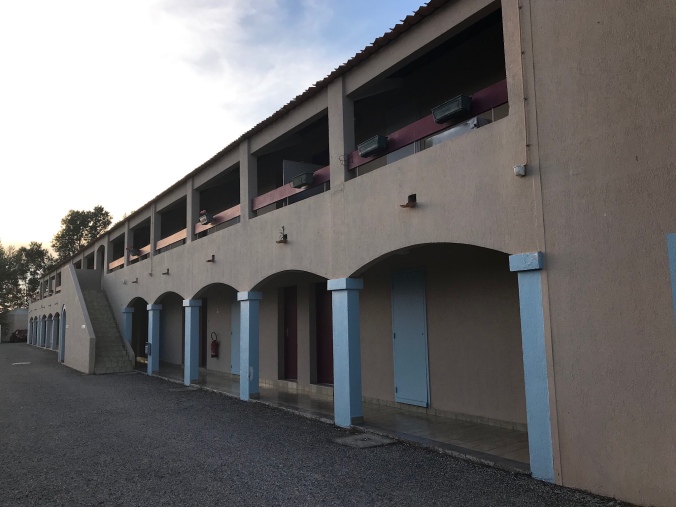 The breakfast was in their restaurant and it had breads, cheese, luncheon meats. I think it also had yogurt but I didn’t have any of it. The one thing that was lacking was fruit. There was a fruit stand right outside and the small town was in the middle of farm land but alas no fruit as part of my $9 Euro’s a day. I could see the pool from my room and I did have a balcony but that week I was in France was the hottest on record so I tended to not even open the drapes to keep the heat out.

The bathroom was as little interesting since they separated the toilet into a smaller room from the sink and the bathtub/sower. It was weird because after you went to the bathroom, you need to wash your hands which means changing from one room to another. It’s one of those first world problems but its something that you think about when you see a set up that just doesn’t make sense to you. I did have a TV and an A/C but the A/C was one of those window A/C’s that I used to have in my mom’s house. The TV was ok, it was at least HD so I could watch some of the World Cup games but the signal kept on cutting in and out.

Another plus was that there was free WiFi. For some reason I couldn’t connect my travel router to it so I only connected it to my work phone and nothing else to protect my data from snooping. The speed was ok, for some reason I coudln’t get the FIFA app to load anything but Safari worked so that was a plus. Obviously all the plugs in the room were for France and I had an adapter that would make all my stuff work so that wasn’t really a big problem. It was nice that they provided a desk (but no chair?) that was close to my bed so I could be within easy reach of my phones.

There wasn’t an elevator so you needed to use your muscles to bring your bags to the room. I was upstairs but I also packed smart by only bringing a roll aboard and my back pack. Some of my team brought big suitcases so they had a little harder time checking in and checking out. The hotel was right next to a farm and right across the street was a grocery store that closed at 8PM (what????). There wasn’t any place really close to eat unless you walked about a mile or so down the road and even then, everything started closing down at around 9PM with an exception or two. There were also no lights in the parking lot so if you’re there late at night you can see the stars really well but you also can’t see where you’re walking so I had to use the flash on my iPhone to help navigate my way to my room.

Overall, it wasn’t too terrible in terms of where I stayed. The person that was manning the front desk was very nice and she tried to communicate with me in English but ultimately we had to use Google Translate in Conversation Mode. Would I go back to the South of France? Sure but most likely I’ll look to stay in a bigger city that has at least an Acor hotel in it or something that’s closer to what I’m used to and take a rental car everywhere if I’m going to explore the smaller towns and sights..